The California State Assembly recently passed a bill to eliminate electricity-related greenhouse gas emissions by 2045, and cut them by half by 2026. Details are outlined below in the Quartz article titled, “California is poised to be the world’s largest economy with a zero-emissions goal”.  The article indicates that while the state GDP has grown over 80% in the last 15 years, emissions have declined steadily. While California has an ambitious energy-related policy focus, it also serves as a global technology center, developing cutting-edge sustainability innovations and strategies.

With the objective to enhance competitiveness in the Central Valley region GLDPartners has been developing proactive methods in Merced to reduce future emissions impacts from the Mid California Industrial Trade District (MCITD) which is a large-scale commercial and industrial project that will include 8 million square feet of development and 10,000 new jobs.  The team is developing new infrastructure and logistics strategies with strategic public and private sector partners, including the Port of Los Angeles and the BNSF railroad regarding how the next wave of goods movement technology might support inland distribution.  This could include the use of hydrogen and electric, and automobile companies and their suppliers to ascertain future automobile charging and fueling requirements.

The team has been exploring opportunities with the San Joaquin Air Pollution Control District (Valley Air) on best practices for site specific and regional sustainable energy solutions. To date, Valley Air has been very active in agricultural equipment upgrades and other targeted emissions reductions. Ultimately, team aims to position the MCITD as a national model to maximize economic potential while also employing sustainable practices to support state and regional emissions objectives. This will include a combination of integrated regional freight movements to reduce commercial vehicle miles traveled and promote alternative energy use on site.  Separately, the California Autotech Testing and Development Center (CATDC) is located within the project and will provide testing facilities for new and emerging vehicle propulsion systems and technology.

The Golden State is turning into the Solar State. On Aug. 28, California’s state assembly passed a bill to eliminate electricity-related greenhouse-gas emissions by 2045 and cut them by half by 2026. If the state senate and governor Jerry Brown sign off on it, California will become the world’s largest single economy to adopt a zero-emissions goal for its electricity grid by relying on wind, solar, and other renewable technology.

Hawaii is the only other US state with greater ambition (it enacted a bill in June), and Massachusetts is considering a similar bill. The European Union’s bloc of 28 countries (the third-largest source of global emissions) plans to achieve net-zero greenhouse-gas emissions by 2050 across all sectors of all economies. To do this, carbon removal systems now being developed (as Quartz has reported) are expected to play a role in compensating for sectors such as aviation that may still emit greenhouse gases even after the energy grid is fully powered by renewables.

California can set its ambitious goal thanks to the explosive growth of renewable energy in the state. Solar, in particular, has beat all expectations soaring from 0.5% of electricity generation in the state in 2010 to 10% last year. That helped the state push GHG emissions below 1990 levels by 2016—four years early. 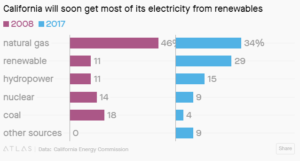 The carbon intensity of California’s economy (emissions per unit of gross domestic product) has been steadily falling: emissions have dropped 12% from their 2001 peak, while the state’s GDP has grown 91% in the same time frame. This has helped make the decision to clamp down on greenhouse-gas emissions more popular than it might have been otherwise. A Public Policy Institute of California poll of 1,711 adult residents this July found 72% of Californians supported a future with zero energy emissions—as did about half of Republicans in the sample. 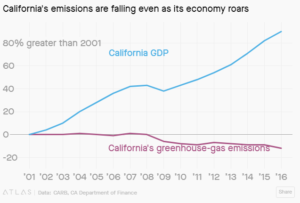 California has a massive energy-related legislative agenda lined up this year, unrivaled anywhere else in the US according to the Advanced Energy Economy AEE, a clean-energy advocacy group. Bills to modernize the regional electrical distribution system, enact a more stringent renewables mandate, and set the zero energy emissions goal are all working their way through the state legislature, alongside a dozen others.

“While it’s not new for California to make a splash on energy legislation, it is pretty significant that three groundbreaking energy bills are being actively discussed in the legislature this final week,” wrote Emilie Olson of AEE by email.  “Wrapping in the controversial wildfire conversations as well, these bills together represent the largest clean energy legislation being considered simultaneously relative to anywhere else in the country.”

GLDPartners is an international investment and advisory firm that specializes in revenue and infrastructure development projects at and around high-opportunity airports, seaports and strategic trade and logistics hubs. The firm supports global manufacturers and companies with retail distribution operations with network design strategy and facility location analytics. GLDPartners’ clients and market perspective is global and the firm is headquartered in Scottsdale, Arizona, with offices in New York, Washington DC, Wisconsin and in the UK.

About the Author: Robert Gollnik